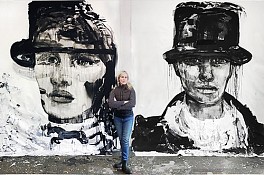 "With a pair of monumental heads of female equestrians (each 9 by 12 feet) Suzy Spence extends her explorations of drag hunting into new formal and emotional terrain. Gender, class, sexuality and other existential concerns still permeate the  imagery, but the shift in scale catapults her concerns to a new level. Retaining the dashed off bravura of her small studies in Flashe, these billboard-scaled faces engender a sense of cognitive dissonance: at once cool titans and vulnerable mortals, these hunters ride a narrow path between the intimate and the hieratic." 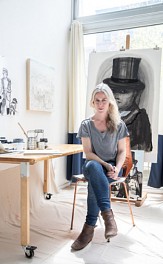 "Last winter on a trip to Brooklyn I visited Suzy Spence who is a painter, curator, and writer who grew up in Maine. We enjoyed connecting around our shared Maine experiences while she gave me a tour of her live/work studio. Suzy has been active in the New York art world since the 1990s when she worked at the New Museum and exhibited her own work with downtown gallery American Fine Arts. In addition to painting and a variety of curatorial projects she is the Executive Publisher of Artcritical Magazine. When I entered Suzy's stunning, modern home I was taken by the large equestrian portraits on the walls of her studio, and the way her work space was so much a part of her living space. It's the first room you walk into, just off the kitchen and facing the street, with gorgeous floor to ceiling windows (light envy!) and is draped with drop cloths."

Hunters and Hustlers: Feminism and Theatricality in Suzy Spence and Heather Morgan

"A major element of early feminist art criticism came down to detective work. Outing the male gaze in paintings of female subjects was akin to using black light to reveal traces of blood at a crime scene. Form, facture and viewpoint served as evidence in a forensic process – manifestations of objectification, voyeurism and idealization were exposed.

"Nowadays, the crime scene is complicated, especially where female authorship is concerned. In paintings of women by women, thanks to a sense of intimate self-knowledge, what has begun to emerge are emphatic – indeed, empathetic – attempts to maneuver the inherent theatricality of being subjected to the gazed. The subject can become complicit and resigned to being a displayed object, or lay out an elaborate performative trap in which the unaware spectator devours the bait. Two current shows present different but equally intriguing examples of such maneuvering: Suzy Spence’s A Night Among the Horses, ongoing at Sears Peyton Gallery in Chelsea, and Heather Morgan’s Heavenly Creatures, at David Schweitzer Gallery, last month, in Bushwick." 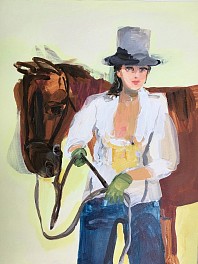 Suzy Spence: A Night Among the Horses

"Suzy Spence is not afraid to go where our darker thoughts wander when we think of the regalia and and ritual of the hunt. Amidst the overt presence of violent death, the gnashing of the hounds' teeth, and the sweaty flanks of the steeds is the other primal urge of sex.

"Both males and females don the plumage of pink coats and top hats in an aristocratic dance of seduction, but in this case the artist has chosen to lampoon the male gaze by pushing the fetishization of the woman hunter into the wider zone of sexualized object. The Optimist (2017) and Untitled Riders (2017) present huntresses in various states of dishabille, while Death by Black Horse II (2017) doubles as both a bloody trampling of a rider and a retelling of Pasiphae and the bull. The loose and fluid brushstrokes of the monochromatic flashe works lend a witty spontaneity reminiscent of Thomas Rowlandson's pithy caricatures, while the polychrome pieces are darker and a bit more stiff-upper-lip."

"Luxuriance is more than a painterly quality in the work of Suzy Spence. It is a symbolic form. Bravura paint handling conveys the very sense of sport that is her motif in images of the hunt. Riders throw themselves with panache into the chase without attendant loss of elegance or control. Their very sweat is decorous in an almost heraldic balance of vitality and poise. There is a corresponding dialectic in Spence’s attitude towards her subject matter. Her catalogue essayist, Amy Rahn, deftly describes the feminist and class critique at the heart of her gender-bending approach while equally acknowledging her personal investment in riding, her participation in the culture that she observes. “The way these paintings slip—between genre and critique of genre, between a love of the sartorial poses of foxhunting and a critique of their masculine power, and between portraiture and figurative painting—give us a glimpse of something dark and rich that hammers the ground between critical thought and sensuous painting.” The full throttle romance of “the drag” (the term for hunting with a substitute fox segues sexily into the fey innocence of Spence’s idealized sorority of latter-day Artemises) speaks to an artist who hunts with the hounds and runs with the hares."

"Manhattan’s Sears-Peyton Gallery exhibits several artists who could be said to focus on the mane event, including Jane Rosen and Thomas Hager. The California-based Rosen paints and sculpts horses and other wildlife on her ranch, working with equal virtuosity across a variety of media, from hard Provençal limestone to soft charcoal on paper. Hager, for his part, does cyanotypes and pigment prints of horses, giving an elegiac and timeless quality to his subjects.

"Another Sears Peyton artist, Brooklyn- and Vermont-based Suzy Spence puts her own modern-day spin on English sporting art. “I love these paintings, with all their tension and complexity, and I return to them again and again,” says Spence, who makes loosely painted, charmingly gestural scenes. “They’ve come to represent refinement, but what many people don’t know is that this manly sporting life was actually quite debauched.” Spence cites both the Lascaux cave paintings and painter Susan Rothenberg’s well-known contemporary series of abstracted horses as secondary inspirations."