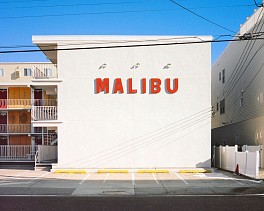 If you have a love for midcentury design, then you might want to consider a road trip along the southern New Jersey coastline in America where some of the most significant examples of motels from that time still exist, many of which remain unchanged.

Situated in The Wildwoods, a group of small shore towns on a five-mile-long barrier island, the postwar resorts have been captured by photographer Tyler Haughey in his series, Ebb Tide. 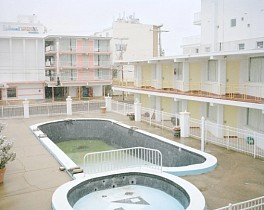 The Wildwoods is the collective name for a cluster of small shore towns spread across a five-mile-long barrier island in southern New Jersey. The area first developed into a major summer tourism destination in the 1950s when brothers Lou and Will Morey, inspired by a visit to Miami’s South Beach, started building motels on the island. The Jersey Shore destination got another big bump in 1957 with the completion of the Garden State Parkway, which channeled an estimated 350,000 additional cars to the region every year. By 1970, more than 300 new motels had been built in The Wildwoods, many of them owned by the Moreys.

Around half of those motels are still in operation, and they’re the subject of native New Jerseyan Tyler Haughey’s series, Ebb Tide. Haughey grew up near Asbury Park on the northern stretch of New Jersey’s long Atlantic coast, so he’s familiar with the culture of beach towns that fill up with tourists during the summer and empty out in the winter. “I have a strong connection to that landscape, especially in the off-season when all the tourists leave,” he says. “People still live there, but a lot of these places are just kind of forgotten about.” 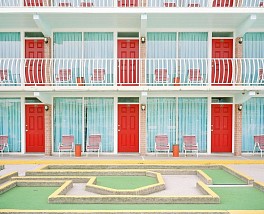 The saturated hues in Garden State–born Tyler Haughey’s photographs of off-season Jersey Shore motels infuse these desolate venues with warmth and humor. The pictures look as though they could be frames from a Wes Anderson film: Haughey finds visual magic in a prosaic locale, capturing the beauty of the shore’s Art Deco structures in both the sun and snow. One stunning example, Gold Crest Resort Motel (2016), shows a vivid lodging façade with cherry-red doors, turquoise drapes, blindingly white railings, and a vivid green putt-putt yard demarcated by a yellow curb. Gallerist Gaines Peyton described the “box-like effect” of Haughey’s images: From her perspective,they become an “extension of the architecture,” as the pictures evoke both painterly geometric abstraction and Joseph Cornell’s famous boxes.

The particular and nostalgic landscapes of Tyler Haughey

Panthalassa Society: Everything is Regional by Tyler Haughey

Photographer Tyler Haughey grew up less than a mile from the beach just outside of Asbury Park, in New Jersey. On weekends, he used to spend time at his grandparents’ beach house in Barnegat Light where started a true fascination for coastal towns and regions.

Earlier this year, New York-based photographer released his new photobook entitled Everything is Regional, a print project described as a monograph that examines the built environment of northeastern coastal towns and explores how we use, interact with, and remember places designed and known for summer recreation.

I’ve spent the last two years documenting the Mid-century Modern motels of the Wildwoods, a group of shore towns on a five-mile island in southern New Jersey. Built in the ’50s and ’60s and virtually unchanged, they form the largest concentration of postwar resort architecture in the US. As a native of the Jersey Shore, I’ve always been interested in the coast’s history and buildings, and when I happened upon the Wildwoods one winter, I felt like I’d travelled back in time.

Worldwide, the words Jersey Shore have become synonymous with bulky guys and busty girls partying hard and shaming themselves in so many different ways (thank you, MTV). For the non-American, Jersey Shore is actually the common name used for the coast of the US State of New Jersey, a popular summer destination since the 1950s, when many new resorts were constructed to host the influx of tourists. American photographer Tyler Haughey’s beautiful series Ebb Tide captures the unique architecture and mood of these resorts during the off season, when the tourists are gone and the motels sprinkled with snow.

Five years ago, Tyler Haughey, then a student at Drexel University, was driving along the coast when he happened to pass through the Wildwoods. A Jersey Shore native, he’d heard about the Wildwoods but had never been to any of them before. It was February, and the motels were deserted, but he found them captivating, and so he stopped to photograph some of them.

“It felt like I’d happened upon an abandoned film set,” he said.