Kathryn Lynch, Her Days and Nights 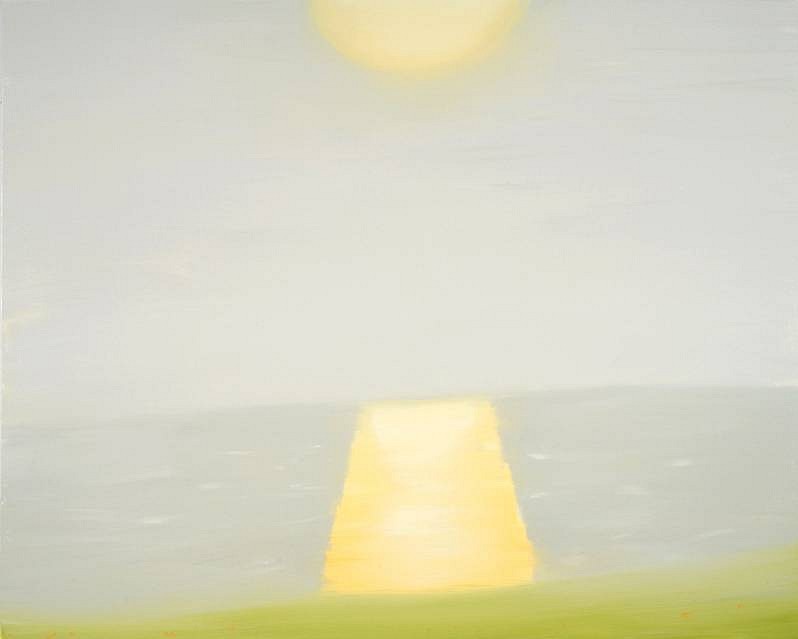 My first memory of Kathryn Lynch's work is when I visited her studio over a decade ago, and was immediately mesmerized by one of her intense blue, Hudson River night scenes. The outlines of the buildings could just barely be discerned in the darkness, exuding a potent tranquility, while tiny lights flickered, infusing the canvas with life. With each passing moment, new forms and details emerged from the darkness, and the peaceful mood of the work enveloped me.

Lynch does not transcribe what she sees, but rather transforms what she observes day after day into a beautiful abstraction of simple often whimsical forms and intense colors.   As the works draw you in, the brush strokes reveal more subtleties each time you look at them. For example, in the current collection, note the tiny dabs of pink visible in the foliage in the left foreground of Sun Reflected.

What seems to be paramount in her work is capturing a mood or feeling. Lynch describes her process this way: "I paint what I walk by on a regular basis. When you walk down the same street everyday you walk with a sense of remembering and forgetting, noticing and knowing. I mix all that stuff rattling around in our minds and bodies with what I see and make it into a picture. The picture creates a home for the senses, a home for the noise in the brain; it is proof that we are alive."  Stylistically and in terms of sensibility, Lynch’s work is akin to that of Albert Pinkham Ryder (1847-1917).  Both artists have a very distinct style and use their own vocabulary of simplified natural forms to create landscapes which are much more about expression than representation, about introspection and personal vision rather than the acute observation of details from nature.     Lynch’s unique style is evident in her rendering of a new protagonist in her work – the boat.  The structure of the boat is merely suggested in a few brushstrokes.   The boat is significant in terms of the formal elements in her work as in Fireworks, in which the boats create a rhythmic pattern across the picture plane. This pattern is enhanced by the swirls of bright light reflected from the boats onto the water. From the solidly anchored black boats, the trim vertical masts lead the eye upward to be met by the brilliant array of exploding red, green, and yellow fireworks that are streaming down from the sky. In the painting 3 Boats, the boats give a sense of scale to the scene. There is a blanket of fog over the water and the scene becomes more clouded as the eye travels into the background. This effect is exemplified by the boats which almost disappear into the murkiness. The only element that pops out is the bright blue downed sail visible on the boat to the right. The inclusion of the boat in the composition adds more of a narrative to the work -- inviting you into the picture and allowing you to feel the mood: the excitement is palpable in Fireworks, the peacefulness soothing in Lonesome Sail, and the pensive quality and sense of solitude calming in Moon and a Sense.

Color, weather, time of day, brush stroke, and scale all contribute to creating a mood or evoking a certain feeling in the viewer of Lynch's paintings.   While her large scale works engulf you, the small size of Moon and a Sense gives the work a certain intimacy like a small jewel inviting you to come up close and peek around the tree into the scene.   In Peeping Sun the orange burst of color of the rising sun as it pops up from behind the hills, the vibrant brushwork of the greenery in the foreground and of the rolling hills in the background all add to the vitality of the scene.

Lynch's paintings lay somewhere between abstraction and representation – she draws upon her distinct vocabulary of forms and creates art that transports you and stays with you - in your mind and in your memory.

Carolyn Lane is a fine art consultant and art historian. She lives in New York City.