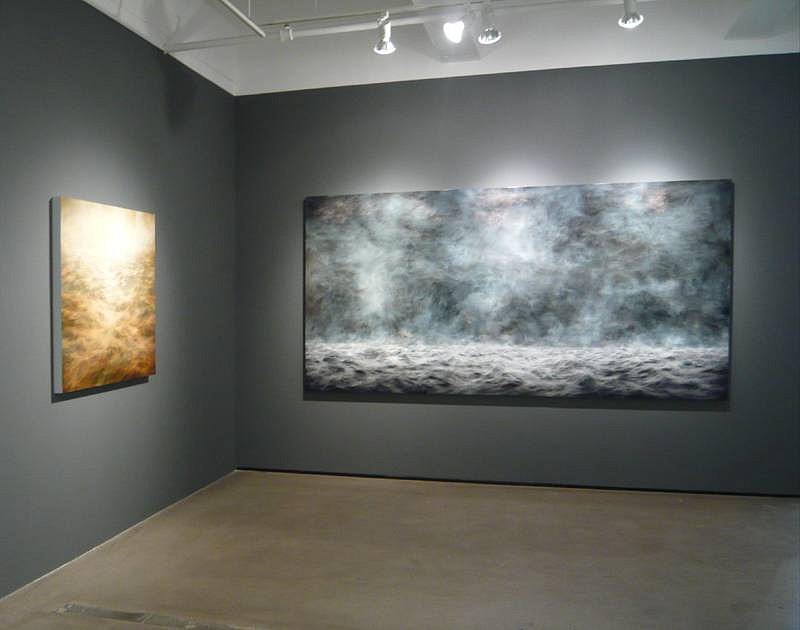 Mary Beth Thielhelm has been painting water for almost 8 years but her obsession with what she calls the “elemental, uncontrollable, and immeasurable ocean” started when she was a child and has been woven throughout her life.   She grew up in Saudi Arabia where she was mesmerized not only by the deep emerald green Persian sea but also the warm dusty light playing over the shifting sands of the water-like dessert.  After graduating from art school, Thielhelm spent many blissful months on the island of Santorini in Greece, where she described the water as “everywhere....and something else”. After moving back to New York, MaryBeth was greatly influenced by a show of works by Hiroshi Sugimoto at the Sonnabend Gallery because she felt that he captured the experience of the water in Santorini.  It was when MaryBeth moved to Maine and lived in a spindly crooked house on stilts overlooking the Atlantic that she felt the moment was right for her to capture the experience of the water.  She did it not by looking at the ocean, but with her back to it; all the time hearing it and smelling it, even feeling it under her house.  By turning her back, Theilhelm allowed the experiences of Saudi Arabia, Santorini and Maine to meld together as she began painting the feeling, rather than the representation of the water.  The resulting paintings range in color from steely grey reminiscent of the North Atlantic to the greens of the Persian seas to the blues of Greece and the salmons of the desert.

MaryBeth says "My intention is to capture the tension of two opposing ideas within one image, addressing the complexity of a single form possessing two opposite truths, as in tranquility and foreboding, beauty and brutality, silence and loudness.” She is in no hurry to discover new subject matter for the water is full of meaning for her and she feels that she has grown as an artist  by sticking to her subject.

Of late, MaryBeth has realized another significant underlying cause for her focus. By titling the exhibition “Unclaimed Waters” she is referring to the environmental and political significance of water today and how in the future water may be our most precious commodity. Countries claim the water rights to areas of the sea.  Will wars  be fought in the future over the rights to water?  And with the recent hurricanes, floods and tsunamis, she asks “how can man possibly control or claim the earth’s waters?”

MaryBeth Thielhlem lives and works in New York City. She studied at London School of Fine Arts and received her BFA from Syracuse University in 1988. Thielhelm has had three solo shows at Sears-Peyton Gallery starting in 2001.  Her most recent group exhibitions include Design Trust at Milk Gallery 2007, Black and White Works form the Permanent Collection at the Daum Museum of Contemporary Art, Missouri, 2006; Center for Contemporary Printmaking, Connecticut, 2006. Her work is included in the Daum Museum of Contemporary Art, The Hunterdon Museum of Art, American Express, Barclay’s Global, Merrill Lynch, Colgate-Pamolive, General Electric, Pfizer and Schwab institutional collections.

The Sears-Peyton Gallery, founded in 1999 by Macie Sears and Gaines Peyton, is located in Chelsea and represents the work of contemporary American artists.  The uniting thread that links their diverse stable is the artist’s commitment to the medium of their choice. Each artist has a way of working that prizes process driven exploration and improvisation.  Many of the artists are inspired by the visual expressions of an earlier time, and use a modern process or presentation to draw parallels to today’s world;  resulting in work that is both timeless and timely.  Ideas are not forced, but explored through rigorous craft.

The gallery is committed to the long term development of their artists; placing works in public and private collections as well as acting as an accessible public space in which works are exhibited and become part of the cultural dialogue.