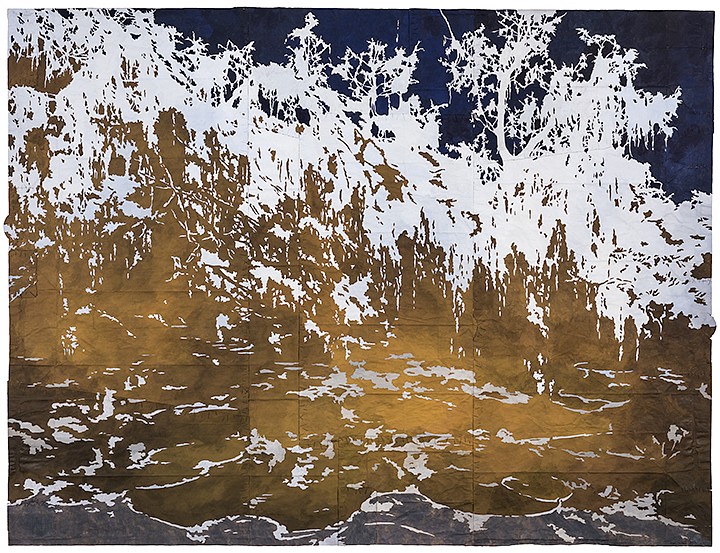 New York, NY— As politicians and pundits debate the virtues and vices of securing national borders, the works in Maysey Craddock’s fourth New York solo exhibition consider instead the fragility of less contrived boundaries—the wild natural shores between land and sea. Coastlines, rivers, and deltas, shaped and reshaped by the sea, by storms, and by humankind, are the abstracted subject and conceptual ballast of Craddock’s recent works. In these paintings, delicately traced tree limbs and ragged alluvial trailings overspread pieced paper surfaces stitched together with silk thread. As the national conversation on border security devolves into the simplistic rigidity epitomized by “the wall,” Craddock offers instead a view of natural borders as radically provisional and delicate—spaces alive with ceaseless adaptation and regeneration.

Craddock’s 2017 painting The Book of Sand is titled for the Jorge Luis Borges short story about a mystical book that perpetually rewrites itself. In Craddock’s work, a white tree line painted in gouache divides the painting diagonally into thirds, the slender branches splintering into a deep blue sky above and dissolving into golden waters below. The trees and lapping tides filter in and out of legibility in the abstracted scene—a shoreline in perpetual flux—echoing Borges’ conceit of ceaseless rewriting.

Based in Memphis and on the Alabama Gulf Coast, Craddock engineers works that trace the edges she finds in nature as they flicker between resilience and vulnerability. As the artist writes, “We think of land as solid and immutable, heavy and dense with proscribed edges and borders (geological, political, cultural, personal), but it shifts as drastically and permanently as anything in our natural world. Coastlines are especially vulnerable to change […]. We shore up, close in, confine and try to tame this ribbon of tenuous border between land and sea, and any remaining patches of wild and verdant coast diminish steadily.”

Craddock’s creative process rhymes with the concept of making-and-unmaking in her work. She photographs riverbanks and shorelines before fracturing the photos into abstracted motifs she adapts into her paintings. She presses brown paper bags, de-acidifies them, and stitches them together with silk thread, eventually painting over them with gouache—the matte, densely-pigmented water-based medium she has long preferred. Craddock calls her stitched paper surfaces “palimpsests” for the way their history as throwaway surfaces remains part of their physicality, even as they become grounds for new creations. Craddock’s process disintegrates form only to recreate it, like waters erode the shore they rebuild—a living boundary suited to the complex currents of our time.

Maysey Craddock: Riverine is on view September 7 – October 7, 2017 at Sears-Peyton Gallery’s Chelsea location at 210 Eleventh Avenue. There is an evening reception September 7 from 6:00 – 8:00 p.m. Gallery Hours are 10 a.m. – 6 p.m. Tuesday through Saturday. For more information or to request further press images, please contact the gallery at info@searspeyton.com.