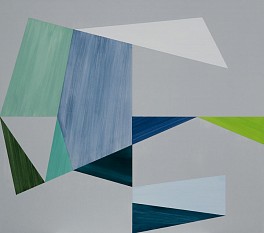 In my painting practice I focus on construction and deconstruction of structure and form to explore ideas about place, context, time and meaning.

My work conjures places that exist metaphorically yet are not tangible. From 2008-2010, I created an extensive series of collages based on the architecture of waves. The work evolved from remote forms to swelling structures and finally deconstructed into minimal references. The transition from a monolithic presence to an ebbing system was a study of how a sense of place is established. Both the waves and their unfolding parts maintain integrity of place, a sense of landscape and architectural intention. The architecture of the wave opened a meditation on where one exists. Where is memory, where is meaning, where is connection?

My purest response is through form. Though forms may not be answers my work distills linear relationships and composition into constructed metaphors of the human experience that offer suggestions of where one might look. The metaphorical architecture of the collages laid the groundwork for later grid-based structures that summon the suggestions of volume, horizon, shadow, and direction to unveil a sense of being.

One profound inspiration for my work is gothic painting. Such paintings, although they predate formal ideas of perspective, reveal inspired spatial feats. The ‘living’ part of many gothic paintings exists far from the plain of the painting. It often appears as if the face and hands of the Madonna or the torso of the Christ child are holes in a tapestry or float mirage like in a desert of gold. In the case of Giotto, the ‘living’ elements transcend the plain of the painting in an almost spiritual relief. It is easy to imagine that the visible parts of the figures could not necessarily be logically reconciled with the parts behind robes. I enjoy thinking that this illusion is a form of spiritual architecture that disembodies concepts of where one exists. I am interested in the harmony of this dissection. My work explores this chasm in its pursuit of place.

Consistent in this varied pursuit of place has been a reductive mark making approach. My work consistently distills the elements of form -- including line, brush stroke, structure, and color-- to their merest essential. In turn my work has conjured idealized forms as place markers. As my work continues, I have come to see the distilled marks as foundations, as if I gave a solid reality to shadows. I strive now to use this mythical depth of shadows as substructures in more layered painting constructions to come.