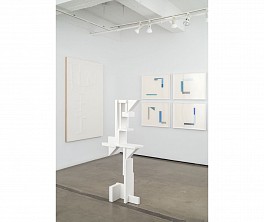 "It’s hard to imagine a series of minimalist, monochrome geometric reliefs as “soft”, and yet in Agnes Barley’s hands, they are.

"Her latest show, “Agnes Barley: Shadow Structures” at Sears Peyton Gallery in New York’s Chelsea, is dedicated mostly to an untitled series of medium- and large-scale relief panels and sculptures, all involving stacked geometric arrangements in meditative white. Her series (Untitled Collage) Late Grid Waves is also on display, but the main focus lies on those mesmerizing, graphic reliefs that play with space, light, and line through variations in height and the occasional shadow thrown here and there." 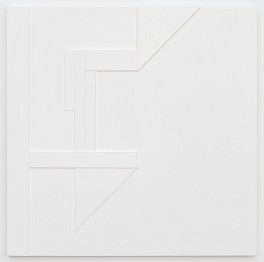 “The question is always, Where?” says the painter Agnes Barley, “though it’s not always about proximity or place. Where is meaning, where is connection, where is life and time and stillness?” Barley’s idiosyncratic use of such a specific adverb seems curious at first, but it provides a critical clue to the dynamics of her work. An unorthodox understanding of place and spatial mechanics animates Barley’s tranquil, delicate abstractions, one that doesn’t always dovetail with the conventional methods of locating the objects of our everyday experience."