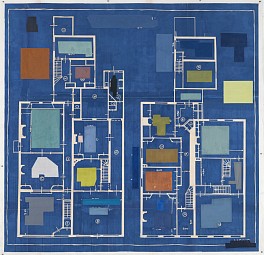 “Plans,” an exhibition of recent ink-on-silk works by Eugene Brodsky, an artist with studios in East Hampton and New York City, is on view at Sears-Peyton Gallery in Chelsea through Dec. 20.

The works reflect Mr. Brodsky’s fascination with the blueprints and sketches of significant 20th-century architecture, especially “the worked-on, tattered, erased, and notated records of how something came to be.” Each piece fuses his vision with that of an architect or planner, resulting in images that suggest, but do not replicate, their origins.

Mr. Brodsky has described these pieces as “essentially creating a jigsaw puzzle of silk,” a complicated process that includes drawing, collage, vector conversion, laser-cutting, inking, silk-stretching, pinning, and assembly, processes that, in the artist’s words, “remain mostly invisible to the viewer, who rightly just sees what’s there.”